Author Diana Jackson has just released her new novel in her

MISSING Past and Present

From February 2020  available on Amazon

By April 2020 ordered at any UK bookshop.

In December 2015 Diana Jackson relocated to Fife, Scotland with her husband, who had recently retired. Her aim for 2016 was to settle into their new life and to keep in touch with friends and family in Bedfordshire and beyond. In 2017 Diana launched her ‘memoir with a difference.’ The Healing Paths of Fife  includes history and fantasy as she explores her new surroundings in an imaginative but thought provoking way.

Previously Diana published two novels in The Riduna Series, historical fiction set in the Victorian era through to the early 20th century. Originally she was inspired to write Riduna by her love of the island of Alderney, its fascinating history and her own family links. When working on her second novel Ancasta Guide me Swiftly Home she developed an unusual interest in the history of early flying boats. Many of her family worked at Supermarine, Southampton up until it was bombed in WW2.

Whilst researching for the third in her series, to take us to the 1930’s, Diana has worked on several very different projects.

Murder, Now and Then, Diana’s first mystery was inspired by an unsolved murder back in 1919 in the heart of Mid Bedfordshire, where she lived and worked as a business and English teacher before moving to Fife. This murder mystery weaves the intriguing events of 1919 of a lass from Jersey UK, with a murder set in 2019. Murder revisited!

The Life and Demise of Norman Campbell is available on Amazon too.

Diana has two blogs, www.dianamj.wordpress.com, where you can read about the background to Diana’s writing but you can also follow her personal adventure and other true stories on www.selectionsofreflections.wordpress.com/

Diana is @Riduna on Twitter  and has an author page on Facebook and would love to hear from you.

The Healing Paths of Fife 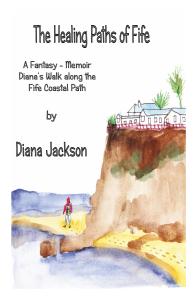 Diana tells her story in a moving and evocative manner from being made redundant from her lifetime of teaching in Bedfordshire to her new life in Fife. It includes snippets of local history, poetry, descriptive passages of the Fife Coastal Path and conversations she enjoyed with fascinating characters she ‘met’ along the way, from St Margaret in Dunfermline to Alexander Selkirk, The real Robinson Crusoe in Lower largo.

Murder, Now and Then ‘

~ A mystery set in the heart of Bedfordshire in 2019 with flashbacks to an unsolved murder 1919.

~ Mysteries set now and back in 18th century of missing people connected through family history and a link to an old disused house called The Grange. What happens to those left behind?

‘Ancasta ~ Guide me Swiftly Home‘ – the sequel to

Riduna set in Woolston, Southampton and the            Channel Islands between 1910 and 1920 taking the Newton family through the Great War and beyond.

‘The Life and Demise of Norman Campbell‘